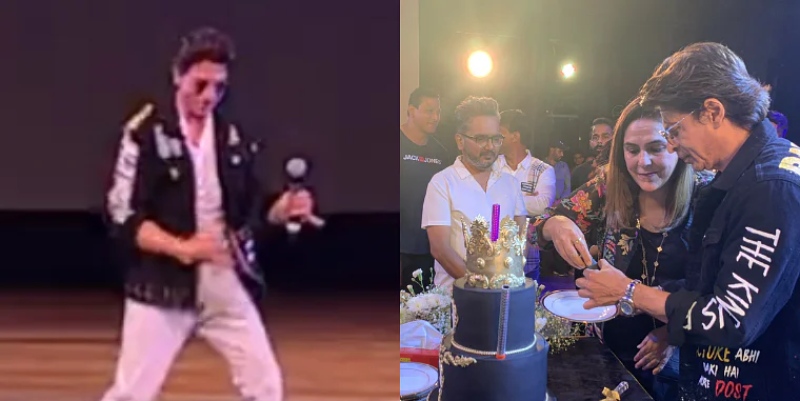 Shah Rukh Khan performed live on Tuesday in front of tens of thousands of fans, dancing to his well-known song Chaiyya Chaiyya. The actor attended St. Andrews College in Mumbai to celebrate his birthday, which is celebrated by his fans as SRK Day, after releasing the teaser for his upcoming movie Pathaan.

The internet is gushing with praise for a video of him dancing enthusiastically to Chaiyya Chaiyya. In response, an admirer said, "I'm glad because this man is happy." Another person remarked, "God maintain this happiness in his life forever." Another commenter said, "Mast Sir. Wow, sir, no one would have danced so well in a movie. Esa dance to movie mai nhi kiya hogaa kisi ne. Haye mai marjawan is jawani pe (I am going wild over his agelessness), said another. "Love him to the moon and back a real icon a legend, all respect for the king khan may god bless him," a further admirer said. One remark stated, "All-time favourite steps by Shah."

Shah Rukh was dressed in a white t-shirt, white jeans, and a denim jacket with the word Pathaan sewn onto the back. During the breaks, he talked to the audience as they applauded him and sang along to the song. At the event, he also participated in a cake-cutting ceremony where he sliced a three-tiered, black cake with the words "SRK" printed on it.

Shah Rukh Khan will make a triumphant film comeback in 2019. Deepika Padukone and John Abraham are featured in Pathaan as well. Tamil, Telugu, and Hindi versions will all be released on January 25. Atlee's action thriller Jawan will come next. In the movie, Shah Rukh is paired with Nayanthara, a star from the south. On June 2 of that year, it would open in theatres. Dunki, his third feature, is under production. Taapsee Pannu plays the primary female role, and Rajkumar Hirani is the film's director.