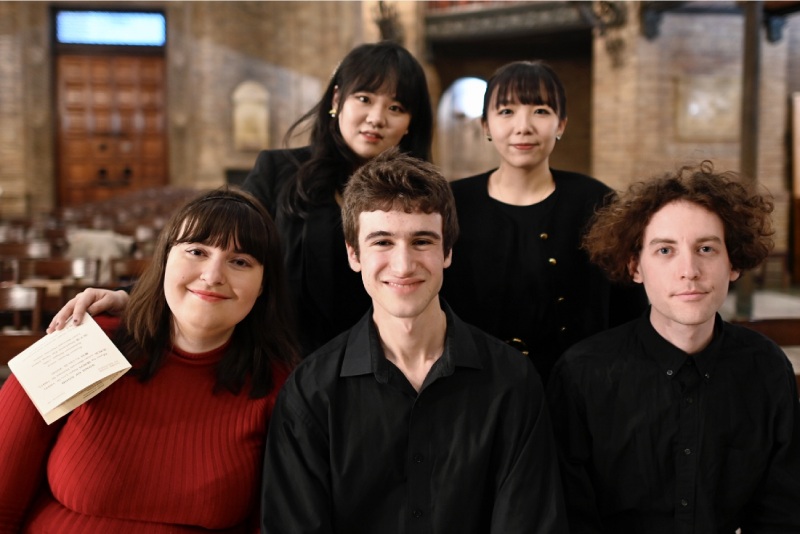 On Wednesday, March 30th, the Song of Sòng new music concert was successfully held at Columbia University in New York. Led by composer Keyin Lou, Song of Sòng is one in a series of Music from East &West concerts, which aim to share the thinking of different understandings of music between China and the west. From the perspectives of young Chinese composers and young American composers, different musical concepts are displayed through the same theme, and new sparks are collided. This series of concerts has been staged at Columbia University for four seasons.

The theme of this concert is to inherit the aesthetics of Song Yun, and the repertoire consists of newly composed songs by Lou Keyin and her friend Julian Bennett Holmes. They will present different perspectives of the East and the West, and use music to present their understanding of Song Yun in their eyes.

The concert opened with a work for cello and piano by Julian Bennett Holmes, the cello played by Aspen fellowship owner Sebastian Stöger. This work is inspired by Li Qingzhao’s poem Adagio of Resonance. The following five new vocal works inspired by Song poetry were all created by Keyin Lou for this concert, including Wang Hai Chao (Liu Yong), which describes the prosperous scene of Hangzhou; the suite Jiu Quan Zi (Pan Lang) and Lyrics to a Fishermen’s Melody (Lu You). As the leading pianist and singer of the concert, Stephanie Ziyi Yang and contemporary vocalist Ruston Ropac brought wonderful performances to the audience.

The concert was held under the strong support of SCIMA “Song Yun China” International Music Alliance, and Columbia University. Founded in New York in 2022, SCIMA is committed to the musical expression and world dissemination of Chinese culture, shaping Chinese musical cultural symbols, and promoting international musical cultural exchanges and cooperation.

The concert producer, composer and founder of SCIMA, Keyin Lou, said, “Song Yun culture presents the characteristics of ‘simple, elegant, simple and quiet,’ advocating the return to nature of art, which represents the height of ancient Chinese civilization and is also Chinese aesthetics. The contemporary concentration of the spirit manifests itself. I hope that through this concert and a series of music activities to be held after SCIMA, while introducing the beauty of Song Yun culture to the world, it will attract more international musicians to join SCIMA to jointly study, discover and create Chinese traditions — the spark of the collision of culture and contemporary art.”