Our images will not be used for propaganda: Anger is directed at a poster depicting Iranian women wearing hijabs 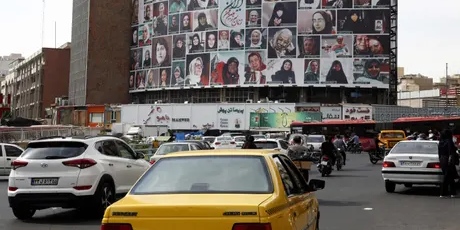 Authorities in Iran were forced to remove a giant billboard in a central square in Tehran featuring fifty women wearing the hijab under the slogan "Women of my land" on Friday, according to the Guardian.

The Islamic Revolutionary Guards Corps-controlled billboard sparked widespread outrage, with women depicted in the poster objecting to their image being used for propaganda.

In a video, multi-award-winning actor Fatemeh Motamed-Arya stated, "I am not considered a woman in a land where young children, little girls, and freedom-loving youths are killed in its fields."

Following that, film director Marzieh Boroumand and mountaineer Parvaneh Kazemi both condemned the use of their images on the billboard.

Shortly after, Iran's Revolutionary Guards Corps reinstated the billboard with the same wording but no photographs.

Protests erupted in Iran following the death of 22-year-old Mahsa Amini in police custody last month. According to Amnesty International, at least 23 children were killed during the protests, and 144 people have been killed so far, though the true death toll is much higher.

In his harshest warning yet to protesters, Iran's supreme leader, Ayatollah Ali Khamenei, said on Friday that no one should think they can overthrow the Islamic Republic.