When Kangana Ranaut slips in a river during emergency reconnaissance, she says,

Kangana Ranaut is working on a new concept for her forthcoming film, Emergency. The actor uploaded a number of photos from her day out with her crew late on Thursday as they scoured a river and the surrounding environs in search of the ideal site for the movie production.

Kangana captioned the images she posted on Instagram with "TECH- RECCE EMERGENCY November/2022." In the photos, Kangana is seen leaping from rock to rock in a river while wearing an olive-green jacket and tights. She can also be seen relaxing on a rock and watching her squad members scout out a potential spot from a distance. In other photos, she can be seen exploring a cottage and surrounding green spaces while wearing a red track suit and a black hat.

Several supporters welcomed her to Assam and said the photos were taken close to Kaziranga National Prak. "Welcome to Karbi Anglong Mam," a fan remarked. Thank you so much for coming to see us, Ma'am. Welcome to our Assam, another person wrote.

She posted more images from the reconnaissance on her Instagram Stories. She posted a photo of herself in the river holding a rock and captioned it, "This is what happens when you become over enthusiastic." In another image, she referred to the members of her squad as "set soldiers." 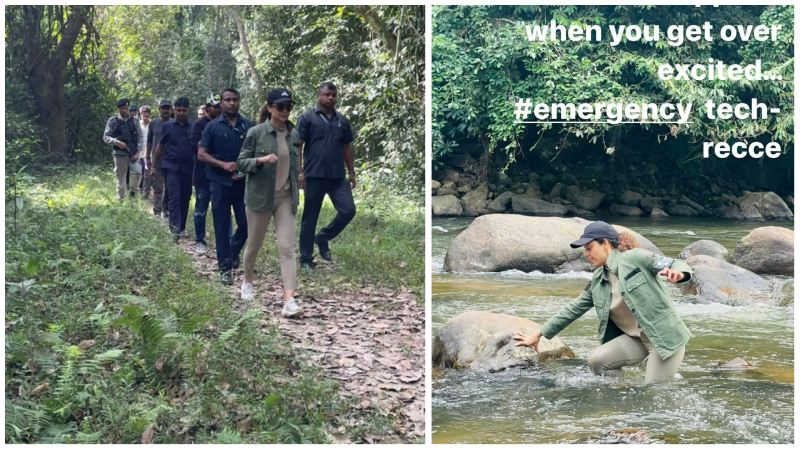 Kangana's first independent film, Emergency, is directed by her alone. With Kangana playing the title role of the late politician, it centres on the life of the former prime minister Indira Gandhi. In addition to Kangana, the movie also has important performances by Anupam Kher, Mahima Chaudhry, Vishak Nair, Satish Kaushik, and Shreyas Talpade.

In addition to Emergency, she has the upcoming film Tejas from filmmaker Sarwesh Mewara, in which she will play an Indian Air Force pilot. She has revealed that she will play the lead in the biopic of legendary theatre performer Noti Binodini.